Cartoon character animation is created with traditional hand-drawn or computer-generated animation techniques. While animation can include any subject, style, or age group, the word “cartoon” usually describes colorful short pieces that are often intended to be humorous and to appeal to children. Cartoon animation has been used for this purpose since the dawn of animated film in the early 20th century. The term “cartoon” is also used to describe printed humorous drawings that appear in newspapers or periodicals. These, however, are more accurately called comic strips or gag panels.
Animation originated at the same time as motion picture photography. Both exist because of a function of the human eye and mind known as persistence of vision. This causes a rapid sequence of different images to be perceived as a single moving image by the observer. The first cartoon character animation films appeared shortly after the debut of motion pictures in 1896. Cartoon animation video followed soon after, pioneered by comic strip artist Winsor McKay with his groundbreaking cartoon Gertie the Dinosaur.
During the golden age of American cinema in the 1930s and 1940s, it was common for movie theaters to show several short films before the main feature. These short films often included a brief news capsule, called a newsreel, and a cartoon. The creators of this era of cartoon character animation were some of the greatest animators in history, including Chuck Jones, Friz Freleng, and the artists of the Walt Disney studios. Many of these theatrical cartoons became beloved classics of animation, winning acclaim and awards. When television gained widespread popularity in the 1950s, these cartoons became regularly syndicated items. 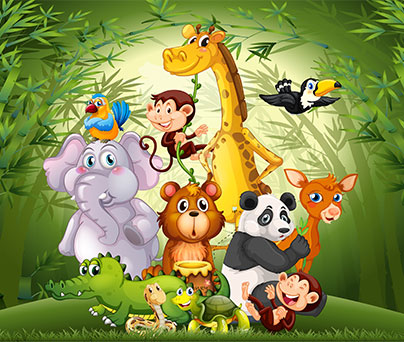 The spread of television ushered in a new era of cartoon animation video. Studios such as Hanna-Barbera oversaw the production of numerous low-cost cartoons for children’s programming. At one time, a viewer would find broadcast television channels saturated with cartoon programming on Saturday mornings and weekday afternoons. The rise of computer animation in the 1990s coincided with the rapid expansion of cable networks, including many for children. Several of these new channels displayed nothing but cartoons on a 24-hour schedule.
The turn of the 21st century saw yet another boon for cartoon character animation. Major film studios created feature-length theatrical films with huge budgets and celebrity voice actors. Broadcast and cable networks launched numerous successful animated series. Some of these new cartoon animation videos were intended for adults but imitated the simple drawing styles of earlier eras. The animation styles of countries such as Japan gained worldwide followings, while increased respect for the art form was demonstrated by a new Academy Award category for Animated Feature Film.
How Your Business Can Benefit from Cartoon Animation Videos?
Well firstly, we’re a professional agency because your company deserves the best service. By using cartoon animation, you can showcase the fun side of your business. Because let’s face it: today’s digital world makes it easy for you to be and present your company however you want to. A professional quality video will get you all the engagement that you’re looking for.
In today’s fast-paced corporate world, your business cannot afford to be left wondering what’s the right way (an agency) to make a dent in the industry as wish. Your digital presence will make it so comfortable for your audience to reach out, get in touch and generate sales for you. Whether you’re a corporate firm or something a little less serious, HoneyBump is your avenue for all your video production needs.
Owing to the reasons mentioned above, your business and company can benefit from using a cut out animation video. In the same vein, any company looking to add a little zing to its marketing communication can also reap the benefits of this medium greatly. If you believe your services are better than your competition but you lack the right way to let your audience know, that’s where we come in play. Our skills and techniques are sure to make your services be known.
Worried about the budget? Don’t be. Our prices are affordable for new and small businesses or those looking to add an exciting touch to their communication.

Let’s start making your own video!

Get Started
Get A Quote